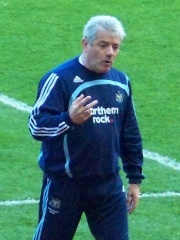 Joseph Kevin Keegan, (born 14 February 1951) is an English former football player and manager. A forward, he played for several clubs, including Newcastle United, Southampton, Liverpool and Hamburger SV. He went on to manage Newcastle United, Fulham and Manchester City, winning promotion as champions in his first full season at all three clubs, and also the England national team. He began his playing career at Scunthorpe United in 1968, before moving to Liverpool in 1971. Read more on Wikipedia

Since 2007, the English Wikipedia page of Kevin Keegan has received more than 2,437,506 page views. His biography is available in 50 different languages on Wikipedia making him the 124th most popular soccer player.