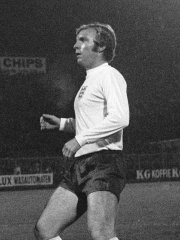 Robert Frederick Chelsea Moore (12 April 1941 – 24 February 1993) was an English professional footballer. He most notably played for West Ham United, captaining the club for more than ten years, and was the captain of the England national team that won the 1966 FIFA World Cup. He is widely regarded as one of the greatest defenders in the history of football, and was cited by Pelé as the greatest defender that he had ever played against.Widely regarded as West Ham's greatest ever player, Moore played over 600 games for the club during a 16-year tenure, winning the FA Cup in 1963–64 and the UEFA Cup Winners' Cup in 1964–65. Read more on Wikipedia

Bobby Moore is most famous for captaining the England football team to victory in the 1966 World Cup.