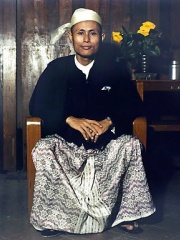 Aung San (Burmese: ဗိုလ်ချုပ် အောင်ဆန်း; MLCTS: aung hcan:, pronounced [àʊɰ̃ sʰáɰ̃]; 13 February 1915 – 19 July 1947) was a Burmese politician, independence activist and revolutionary. Aung San is the founder of the Myanmar Armed Forces, and is considered the Father of the Nation of modern-day Myanmar. Read more on Wikipedia

Since 2007, the English Wikipedia page of Aung San has received more than 1,265,144 page views. His biography is available in 43 different languages on Wikipedia (up from 41 in 2019). Aung San is the 2,486th most popular politician (up from 2,692nd in 2019), the 3rd most popular biography from Myanmar (Burma) and the 2nd most popular Burmese Politician.

Aung San is most famous for being the leader of the Burmese independence movement and the founder of the Burma Socialist Programme Party.

Among politicians, Aung San ranks 2,486 out of 15,710. Before him are Elsa Einstein, Auguste Beernaert, U of Goryeo, Ernesto Cardenal, Decimus Junius Brutus Albinus, and Toghrul. After him are Knud, Hereditary Prince of Denmark, Gülnuş Sultan, Edward de Vere, 17th Earl of Oxford, Polyxena, Manuel Godoy, and Kaloyan of Bulgaria.