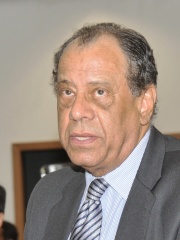 Carlos Alberto "Capita" Torres (17 July 1944 – 25 October 2016), also known as "O Capitão do Tri", was a Brazilian football player and manager who played as an attacking right-sided full-back or wing-back. A technically gifted defender with good ball skills and defensive capabilities, he is widely regarded as one of the best defenders of all time. He also stood out for his leadership, and was an excellent penalty taker. Read more on Wikipedia

Carlos Alberto Torres is most famous for being a professional soccer player. He played for Brazil's national team in the 1970 and 1974 World Cups.

Among soccer players, Carlos Alberto Torres ranks 32 out of 16,880. Before him are Rivellino, Mário Zagallo, Just Fontaine, Gunnar Nordahl, Sócrates, and Didi. After him are Vavá, Stanley Matthews, Karl-Heinz Rummenigge, Mircea Lucescu, Ronaldinho, and Josef Masopust.