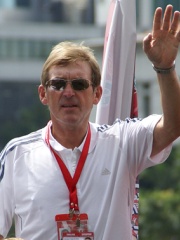 Sir Kenneth Mathieson Dalglish (born 4 March 1951) is a Scottish former football player and manager. During his career, he made 338 appearances for Celtic and 515 for Liverpool, playing as a forward, and earned a record 102 full caps for the Scotland national team, scoring 30 goals, also a joint-record. Dalglish won the Ballon d'Or Silver Award in 1983, the PFA Players' Player of the Year in 1983, and the FWA Footballer of the Year in 1979 and 1983. Read more on Wikipedia

Kenny Dalglish was a Scottish footballer who played for Celtic and Liverpool in the 1970s and 1980s. Dalglish won a total of three European Cups, five league titles, and two FA Cups. He also managed Liverpool during the 1990s.