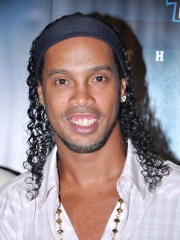 Ronaldo de Assis Moreira (born 21 March 1980), commonly known as Ronaldinho Gaúcho (Brazilian Portuguese: [ʁonawˈdʒĩɲu gaˈuʃu]) or simply Ronaldinho, is a Brazilian retired professional footballer who played mostly as an attacking midfielder, but was also deployed as a winger. Considered one of the best players of his generation and one of the most talented players ever, Ronaldinho won two FIFA World Player of the Year awards and a Ballon d'Or. Read more on Wikipedia

Since 2007, the English Wikipedia page of Ronaldinho has received more than 17,082,270 page views. His biography is available in 91 different languages on Wikipedia (up from 90 in 2019). Ronaldinho is the 43rd most popular soccer player (down from 41st in 2019), the 27th most popular biography from Brazil (up from 28th in 2019) and the 11th most popular Brazilian Soccer Player.

Ronaldinho is most famous for his time with FC Barcelona and AC Milan. He was a two-time FIFA World Player of the Year winner, and is widely regarded as one of the best players of his generation.

Page views of Ronaldinhos by language