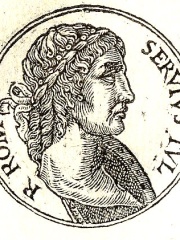 Servius Tullius was the legendary sixth king of Rome, and the second of its Etruscan dynasty. He reigned from 578 to 535 BC. Roman and Greek sources describe his servile origins and later marriage to a daughter of Lucius Tarquinius Priscus, Rome's first Etruscan king, who was assassinated in 579 BC. The constitutional basis for his accession is unclear; he is variously described as the first Roman king to accede without election by the Senate, having gained the throne by popular and royal support; and as the first to be elected by the Senate alone, with support of the reigning queen but without recourse to a popular vote.Several traditions describe Servius' father as divine. Livy depicts Servius' mother as a captured Latin princess enslaved by the Romans; her child is chosen as Rome's future king after a ring of fire is seen around his head. Read more on Wikipedia

Servius Tullius was king of Rome from 616-578 BC. He is most famous for creating the position of plebeian tribune, which gave the plebeians a voice in the Roman government.

Among politicians, Servius Tullius ranks 407 out of 15,577. Before him are Boris Godunov, Maximilian I of Mexico, Sergey Lavrov, Caesarion, Louis X of France, and Stephen I of Hungary. After him are Abdullah of Saudi Arabia, Charles III of Spain, Louis Bonaparte, Louis VIII of France, George III of the United Kingdom, and Baibars.

Others Deceased in 535 BC