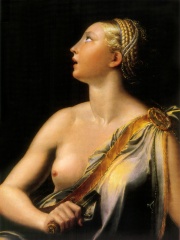 According to Roman tradition, Lucretia ( loo-KREE-shə, Classical Latin: [lʊˈkreːtɪ.a]; died c. 510 BC), anglicized as Lucrece, was a noblewoman in ancient Rome whose rape by Sextus Tarquinius (Tarquin), son of the last king of Rome, was the cause of a rebellion that overthrew the Roman monarchy and led to the transition of Roman government from a kingdom to a republic. There are no contemporary sources; information regarding Lucretia, her rape and suicide, and the consequence of this being the start of the Roman Republic, come from the later accounts of Roman historian Livy and Greco-Roman historian Dionysius of Halicarnassus. The incident kindled the flames of dissatisfaction over the tyrannical methods of the last king of Rome, Lucius Tarquinius Superbus. Read more on Wikipedia

Since 2007, the English Wikipedia page of Lucretia has received more than 957,434 page views. Her biography is available in 38 different languages on Wikipedia making her the 20th most popular companion.

Page views of Lucretias by language

Among companions, Lucretia ranks 19 out of 586. Before her are Marie Louise, Duchess of Parma, Mihrimah Sultan, Khadija bint Khuwaylid, Catherine of Aragon, Nurbanu Sultan, and Roxana. After her are Ankhesenamun, Olympias, Joseph Bonaparte, Messalina, Aspasia, and Mileva Marić.

Among people born in 600 BC, Lucretia ranks 4. Before her are Cyrus the Great, Lucius Tarquinius Superbus, and Esther. After her are Peisistratos, Servius Tullius, Ānanda, Tomyris, Belshazzar, Polycrates, Alexander I of Macedon, and Lucius Junius Brutus. Among people deceased in 509 BC, Lucretia ranks 1. After her are Lucius Junius Brutus, Sextus Tarquinius, and Spurius Lucretius Tricipitinus.

Others Deceased in 509 BC