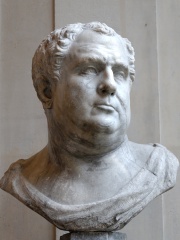 Aulus Vitellius (; Latin: [ˈau̯lʊs wɪˈtɛlːijʊs]; 24 September 15 – 20 December 69) was Roman emperor for eight months, from 19 April to 20 December AD 69. Vitellius was proclaimed emperor following the quick succession of the previous emperors Galba and Otho, in a year of civil war known as the Year of the Four Emperors. Vitellius was the first to add the honorific cognomen Germanicus to his name instead of Caesar upon his accession. Read more on Wikipedia

Vitellius was most famous for being the Roman emperor from 69 to his death in 69.

Page views of Vitelliuses by language

Among politicians, Vitellius ranks 446 out of 15,577. Before him are Louis VII of France, Ali Khamenei, Feodor I of Russia, Clara Zetkin, Emperor Gaozu of Han, and George I of Great Britain. After him are Miklós Horthy, Pertinax, Guy of Lusignan, Gustaf VI Adolf of Sweden, Hongwu Emperor, and Otho.

Among people born in 15, Vitellius ranks 2. Before him is Jude the Apostle. After him are Agrippina the Younger, Apollonius of Tyana, Pomponius Mela, Lollia Paulina, Caratacus, and Publius Ostorius Scapula. Among people deceased in 69, Vitellius ranks 2. Before him is Galba. After him are Otho, James, brother of Jesus, Tigellinus, Sporus, Cartimandua, Evodius, Epaphroditus, and Lucius Calpurnius Piso Frugi Licinianus.