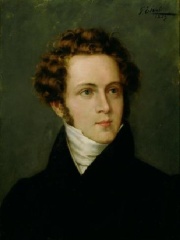 Vincenzo Salvatore Carmelo Francesco Bellini (Italian: [vinˈtʃɛntso salvaˈtoːre karˈmɛːlo franˈtʃesko belˈliːni] (listen); 3 November 1801 – 23 September 1835) was an Italian opera composer, who was known for his long-flowing melodic lines for which he was named "the Swan of Catania". Many years later, in 1898, Giuseppe Verdi "praised the broad curves of Bellini's melody: 'there are extremely long melodies as no-one else had ever made before'."A large amount of what is known about Bellini's life and his activities comes from surviving letters—except for a short period—which were written over his lifetime to his friend Francesco Florimo, whom he had met as a fellow student in Naples and with whom he maintained a lifelong friendship. Read more on Wikipedia

Vincenzo Bellini was a composer who is most famous for his operas "Norma" and "I Puritani."