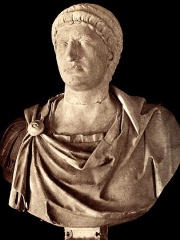 Marcus Otho (; born Marcus Salvius Otho; 28 April 32 – 16 April 69) was the seventh Roman emperor, ruling for three months from 15 January to 16 April 69. He was the second emperor of the Year of the Four Emperors. A member of a noble Etruscan family, Otho was initially a friend and courtier of the young emperor Nero until he was effectively banished to the governorship of the remote province of Lusitania in 58 following his wife Poppaea Sabina's affair with Nero. Read more on Wikipedia

Since 2007, the English Wikipedia page of Otho has received more than 1,572,956 page views. His biography is available in 76 different languages on Wikipedia. Otho is the 435th most popular politician (down from 381st in 2019), the 217th most popular biography from Italy (down from 209th in 2019) and the 38th most popular Italian Politician.

Otho is most famous for being the only emperor of Rome who was not a member of the Julio-Claudian dynasty.

Page views of Othos by language

Among politicians, Otho ranks 435 out of 15,710. Before him are Alfred Rosenberg, Henry II of England, Arcadius, Baibars, Louis, Grand Dauphin, and Ay. After him are Albert II of Belgium, Franz von Papen, John II of France, Jiang Zemin, Mahmoud Abbas, and Zenobia.