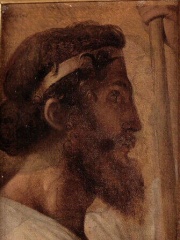 Peisistratos (Greek: Πεισίστρατος; late 7th century BC – 528/27 BC), Latinized as Pisistratus, was a ruler of ancient Athens during most of the period between 561 and 527 BC. His unification of Attica, the triangular peninsula of Greece containing Athens, along with economic and cultural improvements laid the groundwork for the later preeminence of Athens in ancient Greece. His legacy lies primarily in his institution of the Panathenaic Games, historically assigned the date of 566 BC, and the consequent first attempt at producing a definitive version of the Homeric epics. Peisistratos' championing of the lower class of Athens, the hyperakrioi (see below), is an early example of populism. Read more on Wikipedia

Peisistratos was most famous for his use of tyrants to rule Athens.

Page views of Peisistratos by language

Among politicians, Peisistratos ranks 424 out of 15,710. Before him are Matthias, Holy Roman Emperor, Louis the German, John III Sobieski, Hongwu Emperor, Solon, and Idi Amin. After him are Christian VII of Denmark, Lothair I, Honorius, Chagatai Khan, Alfred Rosenberg, and Henry II of England.

Others Deceased in 527 BC