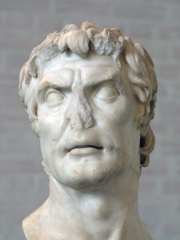 Lucius Cornelius Sulla Felix (; 138–78 BC), commonly known as Sulla, was a Roman general and statesman. He won the first large-scale civil war in Roman history and became the first man of the Republic to seize power through force. Sulla had the distinction of holding the office of consul twice, as well as reviving the dictatorship. Read more on Wikipedia

Sulla was a Roman general and dictator. He is most famous for his victory over Mithridates VI of Pontus in the First Mithridatic War.

Page views of Sullas by language

Among politicians, Sulla ranks 234 out of 15,710. Before him are Ferdinand II of Aragon, Leopold I, Holy Roman Emperor, Christina, Queen of Sweden, Charles IX of France, Mahmud II, and Lech Wałęsa. After him are Joe Biden, Olof Palme, Nicholas I of Russia, Konrad Adenauer, Mehmed I, and Philip II of France.

Others Deceased in 78 BC