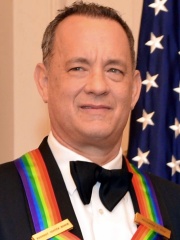 Thomas Jeffrey Hanks (born July 9, 1956) is an American actor and filmmaker. Known for both his comedic and dramatic roles, he is one of the most popular and recognizable film stars worldwide, and is regarded as an American cultural icon. Hanks's films have grossed more than $4.9 billion in North America and more than $9.96 billion worldwide, making him the fourth-highest-grossing actor in North America.Hanks made his breakthrough with leading roles in a series of comedy films which received positive media attention, such as Splash (1984), Bachelor Party (1984), Big (1988) and A League of Their Own (1992). Read more on Wikipedia

Tom Hanks is most famous for his role as Forrest Gump in the movie of the same name.