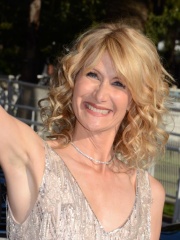 Laura Elizabeth Dern (born February 10, 1967) is an American actress and filmmaker. She is the recipient of numerous accolades, including an Academy Award, a Primetime Emmy Award, and five Golden Globe Awards. Born to actors Bruce Dern and Diane Ladd, Dern embarked on an acting career in the 1980s and rose to some prominence for her performances in Mask (1985) and David Lynch's Blue Velvet (1986) and Wild at Heart (1990). Read more on Wikipedia

Among actors, Laura Dern ranks 954 out of 10,030. Before her are Til Schweiger, Rosanna Arquette, Randolph Scott, Mike Myers, Run Run Shaw, and Marika Rökk. After her are Robert Hardy, Charlotte Gainsbourg, Linda Gray, Michael Fassbender, Richard Jenkins, and Anna May Wong.