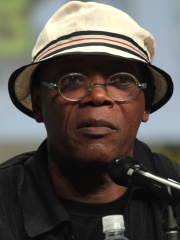 Samuel Leroy Jackson (born December 21, 1948) is an American actor and producer. Widely regarded as one of the most popular actors of his generation, the films in which he has appeared have collectively grossed over $27 billion worldwide, making him the highest-grossing actor of all time (when cameo appearances are excluded). He rose to fame with films such as Coming to America (1988), Goodfellas (1990), Patriot Games (1992), Juice (1992), Menace II Society (1993), True Romance (1993), Jurassic Park (1993), and Fresh (1994). Read more on Wikipedia

Samuel L. Jackson is most famous for his role as Jules in the 1994 film Pulp Fiction, which has become a cult classic.