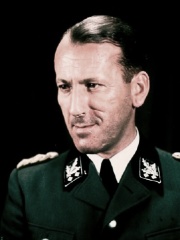 Ernst Kaltenbrunner (4 October 1903 – 16 October 1946) was a high-ranking Austrian SS official during the Nazi era and a major perpetrator of the Holocaust. After the assassination of Reinhard Heydrich in 1942, and a brief period under Heinrich Himmler, Kaltenbrunner was the third Chief of the Reich Security Main Office (RSHA), which included the offices of Gestapo, Kripo and SD, from January 1943 until the end of World War II in Europe. Kaltenbrunner joined the Nazi Party in 1930 and the SS in 1931, and by 1935 he was considered a leader of the Austrian SS. In 1938, he assisted in the Anschluss and was given command of the SS and police force in Austria. Read more on Wikipedia

Ernst Kaltenbrunner was the highest-ranking member of the SS to be convicted at the Nuremberg Trials. He was found guilty of war crimes and crimes against humanity and sentenced to death.

Among politicians, Ernst Kaltenbrunner ranks 607 out of 15,577. Before him are Philip the Good, Christian IX of Denmark, Yongzheng Emperor, Frederick IX of Denmark, Gorm the Old, and Taejo of Goryeo. After him are Maximilian II, Holy Roman Emperor, Peleus, Honorius, Heydar Aliyev, Charles I of Anjou, and Emperor Jimmu.