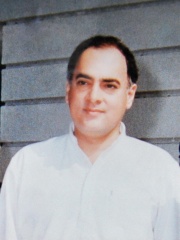 Rajiv Gandhi ( (listen); 20 August 1944 – 21 May 1991) was an Indian politician who served as the sixth prime minister of India from 1984 to 1989. He took office after the 1984 assassination of his mother, then Prime Minister Indira Gandhi, to become the youngest Indian Prime minister at the age of 40. Gandhi was from the politically powerful Nehru–Gandhi family, which had been associated with the Indian National Congress party. Read more on Wikipedia

Rajiv Gandhi was the Prime Minister of India from 1984 to 1989. He was assassinated in 1991 by a suicide bomber, which led to his widow, Sonia Gandhi, taking over as the president of the Indian National Congress.

Among politicians, Rajiv Gandhi ranks 2,176 out of 15,577. Before him are Muhammad I Tapar, Ibrahim Boubacar Keïta, Kiya, Ferdinand II, Archduke of Austria, Blanche I of Navarre, and Edith Frank. After him are Twosret, Lucius Cornelius Cinna, Michael Bloomberg, Charles Frederick, Duke of Holstein-Gottorp, Louis, Duke of Orléans, and János Áder.