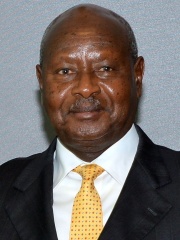 Yoweri Kaguta Museveni (pronunciation ; born 15 September 1944) is a Ugandan politician who has been President of Uganda since 1986. Museveni was involved in rebellions that toppled notorious Ugandan leaders Idi Amin (1971–79) and Milton Obote (1980–85) before capturing power in the 80s. In the mid- to late 1990s, Museveni was celebrated by the West as part of a new generation of African leaders. During Museveni's presidency, Uganda has experienced relative peace and significant success in battling HIV/AIDS. Read more on Wikipedia

Since 2007, the English Wikipedia page of Yoweri Museveni has received more than 1,951,509 page views. His biography is available in 63 different languages on Wikipedia making him the 3,042nd most popular politician.

Among politicians, Yoweri Museveni ranks 3,021 out of 14,801. Before him are Alexander II of Macedon, Jomo Kenyatta, Mstislav I of Kiev, Ayas Mehmed Pasha, Lenín Moreno, and Günter Schabowski. After him are Alexander Jannaeus, Ibrahim ibn al-Walid, Ivan Asen II of Bulgaria, Alexios I of Trebizond, Carl Friedrich Goerdeler, and Jean Casimir-Perier.