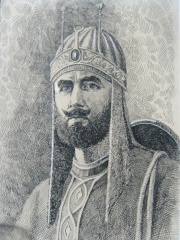 Sher Shah Suri (Pashto: شیرشاه سوری) (1472, or 1486 – 22 May 1545), born Farīd Khān (Pashto: فرید خان) , was the founder of the Sur Empire in India, with its capital in Sasaram in modern-day Bihar. He introduced the currency of the rupee. An ethnic Pashtun ruler, Sher Shah took control of the Mughal Empire in 1540 CE. After his accidental death in 1545 CE, his son Islam Shah became his successor.He first served as a private before rising to become a commander in the Mughal army under Babur and then the governor of Bihar. Read more on Wikipedia

Among politicians, Sher Shah Suri ranks 2,374 out of 15,577. Before him are Michael IX Palaiologos, Edward Rydz-Śmigły, Ernest Augustus, Elector of Brunswick-Lüneburg, Cevdet Sunay, Romano Prodi, and Franz Joseph II, Prince of Liechtenstein. After him are Zebedee, Michael IV the Paphlagonian, Wilhelmine Amalia of Brunswick-Lüneburg, Niels, King of Denmark, Phalaris, and Jarosław Kaczyński.

Among people born in 1486, Sher Shah Suri ranks 6. Before him are Arthur, Prince of Wales, Andrea del Sarto, Heinrich Cornelius Agrippa, Jacopo Sansovino, and Chaitanya Mahaprabhu. After him are Charles III, Duke of Savoy, Francysk Skaryna, Gerolamo Emiliani, Ahuitzotl, Johann Eck, and Martin Agricola. Among people deceased in 1545, Sher Shah Suri ranks 5. Before him are Hans Holbein the Younger, Maria Manuela, Princess of Portugal, Hans Baldung, and Injong of Joseon. After him are Charles Brandon, 1st Duke of Suffolk, Elizabeth of Austria, Albert of Brandenburg, Francis I, Duke of Lorraine, Peter Faber, Charles II de Valois, Duke of Orléans, and Louis X, Duke of Bavaria.