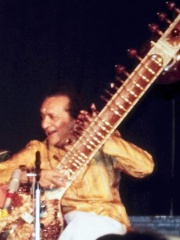 Ravi Shankar (Bengali pronunciation: [ˈrobi ˈʃɔŋkor]; born Robindro Shaunkor Chowdhury, (sometimes spelled as Rabindra Shankar Chowdhury); 7 April 1920 – 11 December 2012), whose name is often preceded by the title Pandit (scholar), was an Indian sitarist and composer. A sitar virtuoso, he became the world's best-known exponent of North Indian classical music in the second half of the 20th century, and influenced many musicians in India and throughout the world. Read more on Wikipedia

Ravi Shankar is most famous for being a sitar player and composer. He is often credited with popularizing Indian classical music in the west.

Among musicians, Ravi Shankar ranks 115 out of 2,675. Before him are Amir Khusrow, Fernando Sor, Ritchie Valens, David Oistrakh, Karl Thomas Mozart, and Cliff Richard. After him are Bill Evans, Neil Young, James Last, Till Lindemann, Fritz Kreisler, and Tony Iommi.