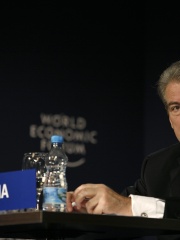 Sali Ram Berisha (Albanian pronunciation: [saˈli bɛˈɾiʃa]; born 15 October 1944) is an Albanian conservative politician who served as the second President of Albania from 1992 to 1997 and Prime Minister from 2005 to 2013. He was also the leader of the Democratic Party of Albania twice, from 1991 to 1992 and then again from 1997 to 2013. A former secretary of the committee of the Party of Labor in the Faculty of Medicine at the University of Tirana, he abandoned his career as a cardiologist and university professor to become the chairman of the Democratic Party in the 1990s. Read more on Wikipedia

Sali Berisha is most famous for being the Prime Minister of Albania from 1992 to 1997. He was born in the village of Dushk, Albania in 1944. He is also known for being the leader of the Democratic Party of Albania.

Among politicians, Sali Berisha ranks 2,124 out of 15,710. Before him are Princess Benedikte of Denmark, Attalus II Philadelphus, Charibert I, Kavad I, Zviad Gamsakhurdia, and Jan Masaryk. After him are Seqenenre Tao, Ellen Johnson Sirleaf, Dom Pérignon, Emeric Thököly, Choe Yong-gon, and Francisco Solano López.