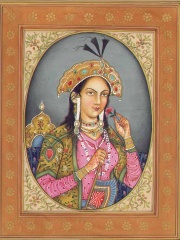 Mumtaz Mahal (Persian: ممتاز محل [mʊmˈt̪aːz mɛˈɦɛl], lit. 'the exalted one of the Palace'), born Arjumand Banu Begum (27 April 1593 – 17 June 1631) was the empress consort of the Mughal Empire from 19 January 1628 to 17 June 1631 as the chief consort of the Mughal emperor Shah Jahan. The Taj Mahal in Agra, often cited as one of the Wonders of the World, was commissioned by her husband to act as her tomb.Mumtaz Mahal was born Arjumand Banu Begum in Agra to a family of Persian nobility. She was the daughter of Abu'l-Hasan Asaf Khan, a wealthy Persian noble who held high office in the Mughal Empire, and the niece of Empress Nur Jahan, the chief wife of Emperor Jahangir and the power behind the emperor. Read more on Wikipedia

Among companions, Mumtaz Mahal ranks 136 out of 687. Before her are Elena of Montenegro, Caterina Sforza, Olga Constantinovna of Russia, Priscilla Presley, Marie Adélaïde of Savoy, and Caroline of Baden. After her are Malhun Hatun, Maria Luisa of Savoy, Sophia Dorothea of Hanover, Albert VII, Archduke of Austria, Gorgo, Queen of Sparta, and Alexandrine of Mecklenburg-Schwerin.

Among COMPANIONS In India

Among companions born in India, Mumtaz Mahal ranks 2. Before her are Sita (null). After her are Mariam-uz-Zamani (1542) and Brian Horrocks (1895).