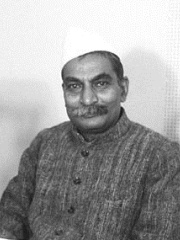 Rajendra Prasad (3 December 1884 – 28 February 1963) was an Indian politician, lawyer, Indian independence activist, journalist & scholar who served as the first president of Republic of India from 1950 to 1962. He joined the Indian National Congress during the Indian Independence Movement and became a major leader from the region of Bihar and Maharashtra. A supporter of Mahatma Gandhi, Prasad was imprisoned by British authorities during the Salt Satyagraha of 1931 and the Quit India movement of 1942. Read more on Wikipedia

Rajendra Prasad was the first president of India, and he is most famous for the role he played in India's independence movement.

Among politicians, Rajendra Prasad ranks 2,162 out of 15,577. Before him are Alexander Jagiellon, Géza II of Hungary, Hostilian, Archduchess Maria Anna of Austria, Talal of Jordan, and Sarah Churchill, Duchess of Marlborough. After him are Qutuz, Volodymyr Zelensky, Vitiges, Elisabeth Ludovika of Bavaria, Töregene Khatun, and King Zhou of Shang.