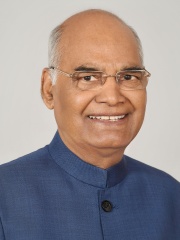 Ram Nath Kovind (born 1 October 1945) is an Indian politician serving as the 14th and current President of India. Prior to his nomination, he served as the 26th Governor of Bihar from 2015 to 2017 and as a Member of Parliament, Rajya Sabha from 1994 to 2006. Read more on Wikipedia

Since 2007, the English Wikipedia page of Ram Nath Kovind has received more than 6,463,205 page views. His biography is available in 71 different languages on Wikipedia making him the 2,365th most popular politician.

Among politicians, Ram Nath Kovind ranks 2,349 out of 14,801. Before him are Psamtik III, Guy III of Spoleto, René Coty, Tunku Abdul Rahman, Joanna II of Naples, and Cleitus the Black. After him are Qutuz, Bonne of Luxembourg, John, Elector of Saxony, Michael the Brave, Ptolemy Keraunos, and Marie of Romania.