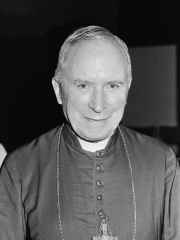 Marcel François Marie Joseph Lefebvre (French: [maʁsɛl fʁɑ̃swa maʁi ʒɔzɛf ləfɛvʁ]; 29 November 1905 – 25 March 1991) was a French Roman Catholic archbishop, of strong traditional Catholic tendency. In 1970, he founded the Society of Saint Pius X (SSPX), a community to train seminarians, in the village of Écône, Switzerland. In 1988, he was excommunicated from the Catholic Church for consecrating four bishops against the express prohibition of Pope John Paul II. Ordained a diocesan priest in 1929, he had joined the Holy Ghost Fathers for missionary work and was assigned to teach at a seminary in Gabon in 1932. Read more on Wikipedia

Marcel Lefebvre was a French archbishop who was suspended by Pope Paul VI in 1976. He was the founder of the Society of St. Pius X, a traditionalist Catholic group.

Among religious figures, Marcel Lefebvre ranks 546 out of 2,272. Before him are Scholastica, Francis of Paola, Seraphim of Sarov, Abbas ibn Ali, Yusuf al-Qaradawi, and Rabanus Maurus. After him are Pope Romanus, Pope Severinus, Pope Boniface II, Theodora, Paul the Deacon, and Ibn Majah.