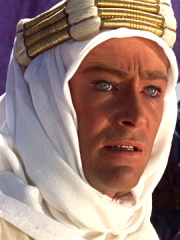 Peter Seamus O'Toole (; 2 August 1932 – 14 December 2013) was a British stage and film actor. He attended the Royal Academy of Dramatic Art and began working in the theatre, gaining recognition as a Shakespearean actor at the Bristol Old Vic and with the English Stage Company. In 1959 he made his West End debut in The Long and the Short and the Tall, and played the title role in Hamlet in the National Theatre's first production in 1963. Excelling on the London stage, O'Toole was known for his "hellraiser" lifestyle off it.Making his film debut in 1959, O'Toole achieved international recognition playing T. E. Read more on Wikipedia

Peter O'Toole was a British actor who starred in many films, including Lawrence of Arabia, Becket, and The Lion in Winter.