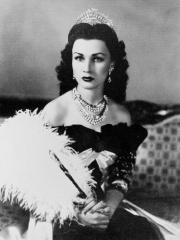 Fawzia of Egypt (Arabic: فوزية; 5 November 1921 – 2 July 2013), also known as Fawzia Pahlavi or Fawzia Chirine, was an Egyptian princess who became Queen of Iran as the first wife of Mohammad Reza Pahlavi, Shah of Iran . Fawzia was the daughter of Fuad I, seventh son of Ismail the Magnificent. Her marriage to the Iranian Crown Prince in 1939 was a political deal: it consolidated Egyptian power and influence in the Middle East, while bringing respectability to the new Iranian regime by association with the much more prestigious Egyptian royal house. Read more on Wikipedia

Fawzia Fuad was the first wife of King Farouk. She was the daughter of King Fuad I and Queen Nazli.

Page views of Fawzia Fuad of Egypts by language

Among companions, Fawzia Fuad of Egypt ranks 51 out of 673. Before her are Marie Leszczyńska, Désirée Clary, Caroline of Ansbach, Elizabeth Woodville, Mary Boleyn, and Mary Tudor, Queen of France. After her are Elisabeth of Valois, Princess Helena of the United Kingdom, Theodora, Ingrid of Sweden, Isabella of France, and Sita.