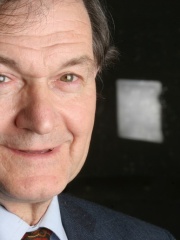 Sir Roger Penrose (born 8 August 1931) is a British mathematician, mathematical physicist, philosopher of science and Nobel Laureate in Physics. He is Emeritus Rouse Ball Professor of Mathematics in the University of Oxford, an emeritus fellow of Wadham College, Oxford, and an honorary fellow of St John's College, Cambridge and University College London.Penrose has contributed to the mathematical physics of general relativity and cosmology. He has received several prizes and awards, including the 1988 Wolf Prize in Physics, which he shared with Stephen Hawking for the Penrose–Hawking singularity theorems, and one half of the 2020 Nobel Prize in Physics "for the discovery that black hole formation is a robust prediction of the general theory of relativity". Read more on Wikipedia