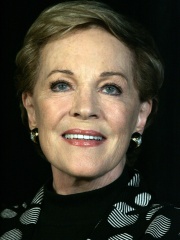 Dame Julie Andrews (born Julia Elizabeth Wells, 1 October 1935) is an English actress, singer and author. Andrews, a child actress and singer, appeared in the West End in 1948 and made her Broadway debut in The Boy Friend (1954), and in 1952 she voiced Princess Zeila in the Italian animated film The Singing Princess. Billed as "Britain's youngest prima donna", she rose to prominence starring in Broadway musicals such as My Fair Lady (1956) playing Eliza Doolittle and Camelot (1960) playing Queen Guinevere. Read more on Wikipedia

Since 2007, the English Wikipedia page of Julie Andrews has received more than 14,299,674 page views. Her biography is available in 73 different languages on Wikipedia making her the 90th most popular actor.