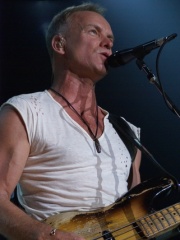 Gordon Matthew Thomas Sumner (born 2 October 1951), known as Sting, is an English musician and actor. He was the frontman, songwriter and bassist for new wave rock band the Police from 1977 to their breakup in 1986. He launched a solo career in 1985 and has included elements of rock, jazz, reggae, classical, new-age, and worldbeat in his music.As a solo musician and a member of the Police, Sting has received 17 Grammy Awards: he won Song of the Year for "Every Breath You Take", three Brit Awards, including Best British Male Artist in 1994 and Outstanding Contribution in 2002, a Golden Globe, an Emmy and four nominations for the Academy Award for Best Original Song. Read more on Wikipedia

Since 2007, the English Wikipedia page of Sting has received more than 815,377 page views. His biography is available in 74 different languages on Wikipedia (up from 73 in 2019). Sting is the 45th most popular musician, the 229th most popular biography from United Kingdom (up from 256th in 2019) and the 17th most popular British Musician.

Page views of Stings by language