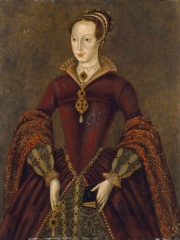 Lady Jane Grey (c. 1537 – 12 February 1554), also known as Lady Jane Dudley (after her marriage) and as "the Nine Days' Queen", was an English noblewoman and de facto Queen of England and Ireland from 10 July until 19 July 1553. Jane was the great-granddaughter of Henry VII through his younger daughter Mary, and was a first cousin once removed of Edward VI. She had an excellent humanist education and a reputation as one of the most learned young women of her day. In May 1553, she married Lord Guildford Dudley, a younger son of Edward's chief minister John Dudley, Duke of Northumberland. Read more on Wikipedia

Since 2007, the English Wikipedia page of Lady Jane Grey has received more than 7,022,704 page views. Her biography is available in 67 different languages on Wikipedia making her the 56th most popular nobleman.

Among noblemen, Lady Jane Grey ranks 62 out of 559. Before her are Marie Thérèse of France, Philippe II, Duke of Orléans, Elizabeth Charlotte, Madame Palatine, Prince Gustaf Adolf, Duke of Västerbotten, Jean, Grand Duke of Luxembourg, and Ramesses IV. After her are Henrietta of England, Pepin of Landen, Cleopatra of Macedon, Maria Alexandrovna, Ferdinando I de' Medici, Grand Duke of Tuscany, and Raymond III, Count of Tripoli.

Among people born in 1537, Lady Jane Grey ranks 3. Before her are Edward VI of England and John III of Sweden. After her are Longqing Emperor, João Manuel, Prince of Portugal, and Ashikaga Yoshiaki. Among people deceased in 1554, Lady Jane Grey ranks 2. Before her is Piri Reis. After her are John Frederick I, Elector of Saxony, Leo Africanus, Sebastiano Serlio, João Manuel, Prince of Portugal, Francisco Vázquez de Coronado, Hieronymus Bock, Thomas Howard, 3rd Duke of Norfolk, Pedro Cieza de León, Marcantonio Trivisan, and Moretto da Brescia.