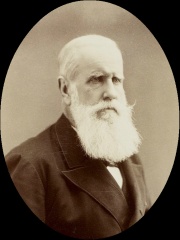 Dom Pedro II (English: Peter II; 2 December 1825 – 5 December 1891), nicknamed "the Magnanimous", was the second and last monarch of the Empire of Brazil, reigning for over 58 years. He was born in Rio de Janeiro, the seventh child of Emperor Dom Pedro I of Brazil and Empress Dona Maria Leopoldina and thus a member of the Brazilian branch of the House of Braganza. His father's abrupt abdication and departure to Europe in 1831 left the five year-old as emperor and led to a grim and lonely childhood and adolescence, obliged to spend his time studying in preparation for rule. Read more on Wikipedia

Pedro II of Brazil is most famous for being the last Brazilian Emperor and for his abolition of slavery.

Page views of Pedro II of Brazils by language

Among politicians, Pedro II of Brazil ranks 1,069 out of 15,710. Before him are Himiko, Aristides, Idris of Libya, Zacchaeus, Frederick I of Sweden, and Grigory Zinoviev. After him are Octavia the Younger, Li Si, Andrew Johnson, Clement Attlee, Xuande Emperor, and Baldur von Schirach.