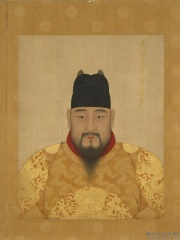 Emperor Yingzong of Ming (Chinese: 明英宗; pinyin: Míng Yīngzōng; 29 November 1427 – 23 February 1464), personal name Zhu Qizhen (simplified Chinese: 朱祁镇; traditional Chinese: 朱祁鎮; pinyin: Zhū Qízhèn), was the sixth and eighth Emperor of the Ming dynasty. He ascended the throne as the Zhengtong Emperor (simplified Chinese: 正统帝; traditional Chinese: 正統帝; pinyin: Zhèngtǒng Dì; lit. 'right governance') in 1435, but was forced to abdicate in 1449, in favour of his younger brother the Jingtai Emperor, after being captured by the Northern Yuan dynasty during the Tumu Crisis. Read more on Wikipedia

Page views of Emperor Yingzong of Mings by language

Among politicians, Emperor Yingzong of Ming ranks 981 out of 15,577. Before him are Frederick VIII of Denmark, Luiz Inácio Lula da Silva, Pedro II of Brazil, False Dmitry I, Alexander I of Yugoslavia, and Louis IV of France. After him are Samuel of Bulgaria, Baldwin I of Jerusalem, Mohammed Daoud Khan, Bolesław I the Brave, Ulrika Eleonora, Queen of Sweden, and Zoë Porphyrogenita.