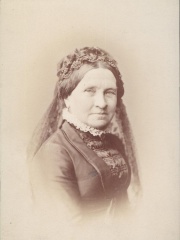 Julia, Princess of Battenberg (previously Countess Julia Therese Salomea von Hauke, Russian: Ю́лия Маври́киевна Гауке; 24 November [O.S. 12 November] 1825 – 19 September 1895) was the wife of Prince Alexander of Hesse and by Rhine, the third son of Louis II, Grand Duke of Hesse. The daughter of a Polish general of German descent, she was not of princely origin. She became a lady-in-waiting to Marie of Hesse, wife of the future Emperor Alexander II and a sister of Prince Alexander of Hesse and by Rhine, whom she married, having met him in the course of her duties. Read more on Wikipedia

Page views of Julia, Princess of Battenbergs by language

Among noblemen, Julia, Princess of Battenberg ranks 234 out of 843. Before her are Adolf, Duke of Holstein-Gottorp, Princess Auguste of Bavaria, Amadeus IX, Duke of Savoy, Arsinoe I, Margaret Stewart, Dauphine of France, and Infante Alfonso Carlos, Duke of San Jaime. After her are Anthony, Duke of Brabant, Louis, Count of Vendôme, Isabella of England, Elisabeth Therese of Lorraine, Blanche of Bourbon, and Princess Deokhye.

Among noblemen born in Poland, Julia, Princess of Battenberg ranks 3. Before her are Catherine the Great (1762) and Cymburgis of Masovia (1394). After her are Duchess Maria Dorothea of Württemberg (1797), Countess Palatine Elisabeth Auguste Sofie of Neuburg (1693), Peter I, Grand Duke of Oldenburg (1755), Richeza of Poland, Queen of Castile (1140), Anna Catherine Constance Vasa (1619), Jadwiga of Kalisz (1266), Catherine of Brandenburg-Küstrin (1549), Ernst Gunther, Duke of Schleswig-Holstein (1863), and Sophia Jagiellon, Duchess of Brunswick-Lüneburg (1522).