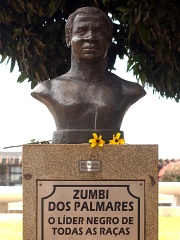 Zumbi (1655 – November 20, 1695), also known as Zumbi dos Palmares (Portuguese pronunciation: [zũˈbi dus pɐwˈmaɾis]), was a Brazilian quilombola leader, being one of the pioneers of resistance to slavery of Africans by the Portuguese in colonial Brazil. He was also the last of the kings of the Quilombo dos Palmares, a settlement of Afro-Brazilian people who had liberated themselves from enslavement in that same settlement, in the present-day state of Alagoas, Brazil. Zumbi today is revered in Afro-Brazilian culture as a powerful symbol of resistance against the enslavement of Africans in the colony of Brazil. Read more on Wikipedia

Since 2007, the English Wikipedia page of Zumbi has received more than 372,024 page views. His biography is available in 23 different languages on Wikipedia. Zumbi is the 3,611th most popular politician (down from 3,351st in 2019), the 69th most popular biography from Brazil (down from 62nd in 2019) and the 12th most popular Brazilian Politician.

Zumbi is most famous for being the leader of the Quilombo dos Palmares, a community of escaped slaves in Brazil.

Page views of Zumbis by language

Among politicians, Zumbi ranks 3,611 out of 15,710. Before him are Kavad II, Boris Tadić, Redbad, King of the Frisians, Robert I, Count of Artois, John Hyrcanus, and Friedrich Wilhelm, Duke of Schleswig-Holstein-Sonderburg-Glücksburg. After him are Victorinus, Wei Zifu, Andrew Dickson White, Menkauhor Kaiu, Tancred of Hauteville, and Balash.