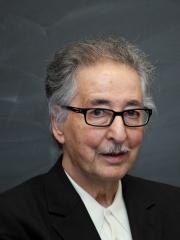 Sayyid Abolhassan Banisadr (pronunciation ; Persian: سید ابوالحسن بنی‌صدر‎; born 22 March 1933) is an Iranian politician. He was the first president of Iran after the 1979 Iranian Revolution abolished the monarchy, serving from 4 February 1980 until he was impeached by parliament on 20 June 1981. Prior to his presidency, he was the minister of foreign affairs in the interim government. Read more on Wikipedia

Abolhassan Banisadr was the first president of Iran. He was overthrown in the 1979 Iranian Revolution.

Among politicians, Abolhassan Banisadr ranks 2,323 out of 15,710. Before him are Pharnaces II of Pontus, George of Poděbrady, Peter, King of Hungary, Al-Amin, Catherine of Navarre, and Ptolemy Keraunos. After him are Emperor Dezong of Tang, Eleanor of Portugal, Holy Roman Empress, Khaba, Volusianus, Mus‘ab ibn 'Umair, and Cecily Neville, Duchess of York.