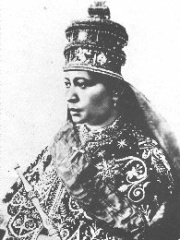 Zewditu (also spelled Zawditu or Zauditu or Zäwditu; Ge'ez: ዘውዲቱ; born Askala Maryam; 29 April 1876 – 2 April 1930) was Empress of Ethiopia from 1916 to 1930. The first female head of an internationally recognized country in Africa in the 19th and 20th centuries, and the first empress regnant of the Ethiopian Empire, her reign was noted for the reforms of her Regent and designated heir Ras Tafari Makonnen (who succeeded her as Emperor Haile Selassie I), about which she was at best ambivalent and often stridently opposed, due to her staunch conservatism and strong religious devotion. Read more on Wikipedia

Since 2007, the English Wikipedia page of Zewditu has received more than 292,758 page views. Her biography is available in 36 different languages on Wikipedia making her the 3,223rd most popular politician.

Page views of Zewditus by language

Among politicians, Zewditu ranks 3,201 out of 14,801. Before her are Wei Zifu, Wilhelm Liebknecht, Gérard Genette, Stefan Löfven, John I of Sweden, and Violeta Chamorro. After her are Jia Xu, Hans Lammers, Abu Yusuf Yaqub al-Mansur, Topa Inca Yupanqui, Hipparchus, and James II of Majorca.