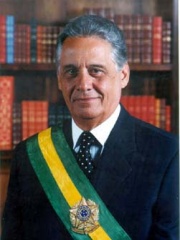 Fernando Henrique Cardoso (Portuguese: [feʁˈnɐ̃dʊ ẽˈʁiki kaʁˈdozʊ] (listen); born 18 June 1931), also known by his initials FHC (Portuguese: [ɛfjaɡaˈse] (listen)), is a Brazilian sociologist, professor and politician who served as the 34th president of Brazil from 1 January 1995 to 31 December 2002. He was the first Brazilian president to be reelected for a subsequent term. Read more on Wikipedia

Fernando Henrique Cardoso was the president of Brazil from 1995 to 2003. He is most famous for his social policies and economic reforms.

Among politicians, Fernando Henrique Cardoso ranks 3,058 out of 15,577. Before him are Sancho II of Portugal, Sirimavo Bandaranaike, Chiyou, Antonio José de Sucre, Nikolai Tikhonov, and Jacques Santer. After him are Alfonso I of Asturias, György Dózsa, David of Trebizond, Muhammadu Buhari, Robert I, Count of Artois, and Go of Balhae.