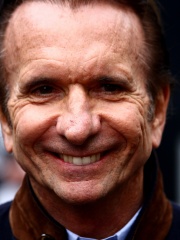 Emerson Wojciechowska Fittipaldi (Portuguese pronunciation: [ˈɛmeʁsõ fitʃiˈpawdʒi]; born 12 December 1946) is a semi-retired Brazilian automobile racing driver who won both the Formula One World Championship and the Indianapolis 500 twice each and the CART championship once. Moving up from Formula Two, Fittipaldi made his race debut for Team Lotus as a third driver at the 1970 British Grand Prix. After Jochen Rindt was killed at the 1970 Italian Grand Prix, the Brazilian became Lotus's lead driver in only his fifth Grand Prix. Read more on Wikipedia

Since 2007, the English Wikipedia page of Emerson Fittipaldi has received more than 926,977 page views. His biography is available in 44 different languages on Wikipedia making him the 10th most popular racing driver.