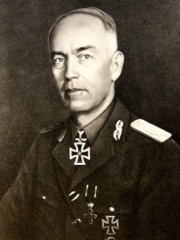 Ion Antonescu (; Romanian: [i'on antoˈnesku] (listen); 14 June [O.S. 2 June] 1882 – 1 June 1946) was a Romanian military officer and marshal who presided over two successive wartime dictatorships as Prime Minister and Conducător during most of World War II. A Romanian Army career officer who made his name during the 1907 peasants' revolt and the World War I Romanian Campaign, the antisemitic Antonescu sympathized with the far-right and fascist National Christian and Iron Guard groups for much of the interwar period. He was a military attaché to France and later Chief of the General Staff, briefly serving as Defense Minister in the National Christian cabinet of Octavian Goga as well as the subsequent First Cristea cabinet, in which he also served as Air and Marine Minister. During the late 1930s, his political stance brought him into conflict with King Carol II and led to his detainment. Read more on Wikipedia

Antonescu was a Romanian military officer who served as the country's Prime Minister and Conducător during World War II. He presided over Romania's transition from a democracy to a dictatorship and was responsible for the deaths of tens of thousands of Jews, Roma, and other Romanian civilians.

Among politicians, Ion Antonescu ranks 684 out of 15,577. Before him are Vytautas, Irene of Athens, Arnulf of Carinthia, Hong Taiji, Michael VIII Palaiologos, and Maxentius. After him are Franjo Tuđman, Afonso I of Portugal, Augustus III of Poland, Nebuchadnezzar I, Gwangjong of Goryeo, and Robert Gascoyne-Cecil, 3rd Marquess of Salisbury.