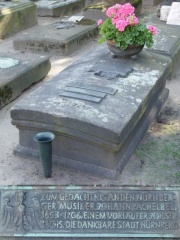 Johann Pachelbel (baptised 1 September 1653 – buried 9 March 1706; also Pachelbel) was a German composer, organist, and teacher who brought the south German organ schools to their peak. He composed a large body of sacred and secular music, and his contributions to the development of the chorale prelude and fugue have earned him a place among the most important composers of the middle Baroque era.Pachelbel's music enjoyed enormous popularity during his lifetime; he had many pupils and his music became a model for the composers of south and central Germany. Today, Pachelbel is best known for the Canon in D; other well known works include the Chaconne in F minor, the Toccata in E minor for organ, and the Hexachordum Apollinis, a set of keyboard variations.He was influenced by southern German composers, such as Johann Jakob Froberger and Johann Caspar Kerll, Italians such as Girolamo Frescobaldi and Alessandro Poglietti, French composers, and the composers of the Nuremberg tradition. Read more on Wikipedia

Johann Pachelbel is most famous for his Canon in D Major.