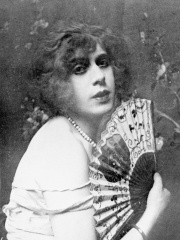 Lili Ilse Elvenes (28 December 1882 – 13 September 1931), better known as Lili Elbe, was a Danish transgender woman and among the early recipients of sex reassignment surgery.Elbe was born Einar Magnus Andreas Wegener, and was a successful painter under that name. After successfully transitioning in 1930, she changed her legal name to Lili Ilse Elvenes and stopped painting altogether. The name "Lili" was suggested by a friend, actress Anna Larssen. Read more on Wikipedia

Since 2007, the English Wikipedia page of Lili Elbe has received more than 5,559,723 page views. Her biography is available in 38 different languages on Wikipedia making her the 81st most popular painter.

Most Popular PAINTERS in Wikipedia