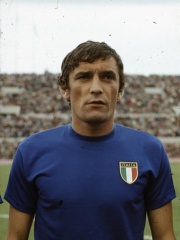 Luigi Riva (Italian: [luˈiːdʒi ˈriːva]; born 7 November 1944) is an Italian former professional footballer who played as a centre-forward. Considered to be one of the best players of his generation, as well as one of the greatest strikers of all time, Riva enjoyed a remarkable scoring record for Cagliari, thanks to his composure in front of goal, powerful left foot and aerial ability; his speed, strength and eye for goal led the Italian journalist Gianni Brera to nickname him "Rombo di Tuono" (Roar of Thunder). Aside from his debut season with Legnano, Riva remained with the Sardinian club for his entire career: he helped Cagliari achieve promotion to the Italian top-flight for the first time in 1964, and later led the club to their only Serie A title in 1969–70.At international level, Riva won the 1968 UEFA European Championship and was runner-up at the 1970 FIFA World Cup with the Italian national team; he also took part at the 1974 FIFA World Cup. Read more on Wikipedia

Luigi Riva is most famous for being a professional football player who played for the Italian national team.