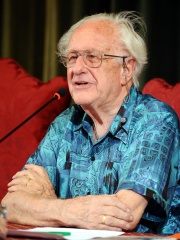 Johan Vincent Galtung (born 24 October 1930) is a Norwegian sociologist, and the principal founder of the discipline of peace and conflict studies.He was the main founder of the Peace Research Institute Oslo (PRIO) in 1959 and served as its first director until 1970. He also established the Journal of Peace Research in 1964. In 1969 he was appointed to the world's first chair in peace and conflict studies, at the University of Oslo. Read more on Wikipedia

Johan Galtung is most famous for his "Violence Triangle" theory. This theory states that there are three components to violence: the perpetrator, the victim, and the bystander.

Among POLITICAL SCIENTISTS In Norway

Among political scientists born in Norway, Johan Galtung ranks 2. Before him are Christian Lous Lange (1869).