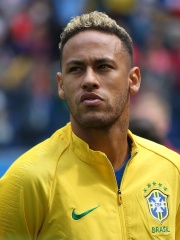 Neymar da Silva Santos Júnior (born 5 February 1992), known as Neymar, is a Brazilian professional footballer who plays as a forward for Ligue 1 club Paris Saint-Germain and the Brazil national team. A prolific goalscorer and renowned playmaker, he is regarded as one of the best players in the world. Neymar has scored at least 100 goals for three different clubs, making him one of three players to achieve this.Neymar came into prominence at Santos, where he made his professional debut aged 17. Read more on Wikipedia

Neymar is a Brazilian professional footballer who plays as a forward for French club Paris Saint-Germain. He is also captain of the Brazilian national team. Neymar is most famous for his skills with the ball, and has been ranked as one of the best players in the world.

Page views of Neymars by language