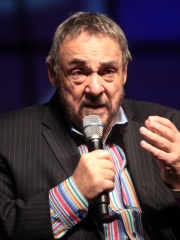 John Rhys-Davies (born 5 May 1944) is a Welsh actor best known for portraying Sallah in the Indiana Jones franchise and Gimli in The Lord of the Rings trilogy. His other roles include Michael Malone in the 1993 series The Untouchables, Vasco Rodrigues in the miniseries Shōgun, Professor Maximillian Arturo in Sliders, King Richard I in Robin of Sherwood, General Leonid Pushkin in the James Bond film The Living Daylights, and Macro in I, Claudius. Read more on Wikipedia

John Rhys-Davies is most famous for his role as Sallah in the Indiana Jones film Raiders of the Lost Ark.