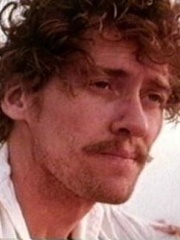 John Curtis Holmes (né Estes; August 8, 1944 – March 13, 1988), better known as John C. Holmes or Johnny Wadd (after the lead character he portrayed in a series of related films), was an American pornographic film actor. He ranks among the most prolific adult film performers, with documented credits for at least 573 films.John Holmes was best known for his exceptionally large penis, which was heavily promoted for its size, rigidity, and purported endurance, with seminal volume allegedly second only to fellow adult actor Peter North's. However, no documented measurement of Holmes' actual penis length, girth, tumescence, sexual stamina, or ejaculate volume has ever been confirmed.Near the end of his life, Holmes attained notoriety for his reputed involvement in the Wonderland murders of July 1981 and eventually for his death from complications caused by AIDS in March 1988. Read more on Wikipedia