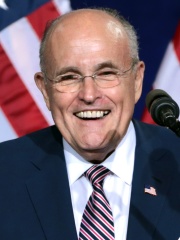 Rudolph William Louis Giuliani (, Italian: [dʒuˈljaːni]; born May 28, 1944) is an American politician and attorney who served as the 107th Mayor of New York City from 1994 to 2001. He previously served as the United States Associate Attorney General from 1981 to 1983 and the United States Attorney for the Southern District of New York from 1983 to 1989.Giuliani led the 1980s federal prosecution of New York City mafia bosses as U.S. Attorney for the Southern District of New York. After a failed campaign for Mayor of New York City in the 1989 election, he succeeded in 1993, and was reelected in 1997, campaigning on a "tough on crime" platform. Read more on Wikipedia

Among politicians, Rudy Giuliani ranks 4,017 out of 15,710. Before him are Jiroemon Kimura, Haitham bin Tariq, Paolo Gentiloni, Johann I Joseph, Prince of Liechtenstein, Birger, King of Sweden, and Simonetta Sommaruga. After him are Hadım Suleiman Pasha, Juan, Count of Montizón, Joachim I Nestor, Elector of Brandenburg, George Vella, Emperor Hanzei, and Sancho I of Pamplona.