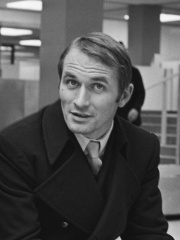 Kurt Roland "Kurre" Hamrin (Swedish: [ˈkɵʈː hamˈriːn]; born 19 November 1934) is a Swedish former professional footballer who played as a winger. He began his career in his home country with AIK, but later played for several Italian clubs, most notably Fiorentina, with whom he won two Coppa Italia titles, a Cup Winners' Cup, and a Mitropa Cup over nine years, making over 350 appearances for the club and scoring over 200 goals in all competitions. Read more on Wikipedia

Kurt Hamrin is most famous for his time spent playing for the Swedish National Team, where he was a prolific scorer. He also played professionally in Italy and the United States.